I just returned from driving a week in Baja Mexico. After dire warnings not to do such a crazy thing, I bit the bullet, joined a caravan of three other vehicles and did the deed.

The adventure began in Quartzsite, flowed into Yuma, where we purchased Mexican Car Insurance. Eight days of full coverage and road side assistance (our cell phones wouldn't work-you use the phones on the side of the road) cost me $118. Then, a $25 fee for spending 7 or more days in Mexico came with a traveler's permit at the customs office, in Algondones. We recrossed the border and slept in the Q. Casino Parking Lot. 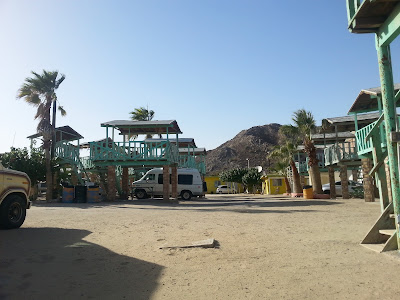 Next morning, passports at the ready, we drove in. Easy enough. Never would have dreamed coming back through U.S. customs would require three hours, due to the incredibly long line on a Sunday Afternoon.
Should have figured it would be that way.

Okay, back to the adventure. We spent the first night at this cute little place right on the ocean in San Felipe. Not Mexican Cheap. American cheap, yes. $15 bucks after a bunch of haggling in Spanish.The place two doors down wanted $25-no deals.
We went to dinner at Rosita's, a fantastic restaurant in walking distance. We piled in on van, just to save gas, etc.
The next day, we drove to Puerticitos, paid $20 each car to camp, enjoyed a really sweet hot springs on the ocean and corralled enough food for a pot luck. I made grilled cheeses, one guy made a massive pot of chili, one cooked up some gotta-go hamburger for us non-vegans.
Nice.
The next day, three cars drove to Gonzonles, and pulled into a spot in Camp Sacrificio. We had drove all over the sand lots nearby, looking for the 'free beach camp' some kids on winter break had told us about.
Almost lost my muffler, gas tank and tires on that two hour adventure.
Whew. For $5 each, we camped and walked the along the Sea of Cortez. Amazing.
That night we had a bonfire with drift wood.
Then the wind picked up. Sand pitting faces, rigs and bare toes, we piled in the cars and made a bee-line back to civilization.
After two more nights in Las Palapas, photo above, we headed home.
San Felipe deserved more than the two days walking tour we managed from our camp. I found sea glass, watched shrimp boats, avoided pit bulls frolicking along the sea shore.

Twice, I was tailgated on the way home. Had I been alone, I do believe the first pick up would have hit me. Thanks to my alert companions who watched the thing unfolding from their rear view mirror, I was spared enduring a wreck. My friends pulled into a rest area, I followed, my tailgater came inches from hitting me and sped away. I had given him many opportunities to pass, but unlike other, rare vehicles, he seemed to have no desire to do that.

Did my Idaho Plates smack of Money?
anyways, home sweet home never seemed so lovely
Back in business, here in Quartzsite.
Posted by Brawny at 7:56 AM